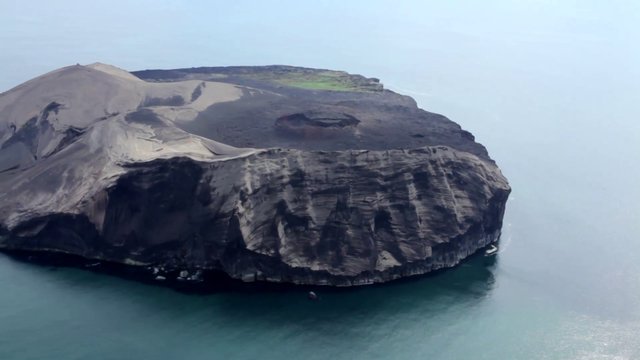 In the early 1960s, a series of volcanic explosions from deep within the Earth’s core culminated in the creation of a barren crest of rock that jutted from the Atlantic Ocean, south of Iceland. Some 40 years later, the processes that govern life itself are at work on this new island.

Before dawn broke on 14th November 1963, the fishing vessel Isleifur II was gliding slowly through the icy waters of the North Atlantic to the south-west of Iceland. As the crew cast their nets into the calm waters to trawl for cod, a large wave suddenly hit the boat, pitching it steeply. When they recovered their balance, the fishermen saw a tall column of dark smoke rising from the water. The ship’s captain assumed that another vessel was in distress and set out to offer resistance. But, as Isleifur II neared the source of the smoke, the crew realized that this was no ship on fire: the ‘smoke’ was in fact steam and the ‘fire’ a volcano erupting beneath the sea. These astonished fishermen were witnessing the first stages in the birth of the island of Surtsey.

The vessel crew started to fear for their own safety and, navigating a course through the clouds of billowing steam, headed for home. Periodic explosions hurled chunks of cooled lava into the air. Within three hours of the initial eruption the column of ash debris was some 12,000ft (3600m) high. In the course of the next two days, it reached shigh as 50,000ft (15,000m) and was visible in Reykjavik, Iceland’s capital city, some 75 miles (120km) to the north-west.

The underwater volcano ripped open 1 sq. mile (2.5km) of the sea floor, lying just 420ft (130m) below the water’s surface. Friction between dust particles generated enormous flashes of lightning across the blackened skies. Further explosions churned the seas, threatening passing vessels. The sudden conversion of so much water into steam set off another chain of undersea explosions that were so intense that they transformed orange-hot magma from the Earth’s core into dust particles. The world’s photographers, journalists and scientists flocked to witness the cataclysm first hand, only to be showered with cinders, pumice and fine volcanic ash – a mixture known as tephra.

By 16th November, a huge ridge of rock had begun to form and harden in the heart of the dense, billowing cloud. Within a couple of weeks an island, around 130ft (40m) high and 1800ft (550m) long, was clearly visible. A month later, because the volcano appeared to have quietened, a party of bold French journalists ventured on to the island, but were soon pelted with more pumice and hot ash from renewed violent explosions – evidence that the landmass was still growing.

By the end of January 1964 the island stood some 500ft (150m) above sea level and covered an area of 1 sq. mile (2.5km), approximately half the size of Central Park in New York. The Icelandic government named it Surtsey, in honour of Surtur, the god of fire in Norse mythology. In Norse mythology, the arrival of the fire God Surtur, who was expected to ride across the trembling Earth, striking it indiscriminately with his sword of fire, was just one of the cataclysmic events thought to herald Ragnarok – the twilight of the gods.

Scientists suspected, however, that the island’s lifespan would be short, since the materials from which it had been formed, chiefly pumice and ash, were soft and unlikely to withstand the constant battering of waves and wind during a North Atlantic winter.

Surtsey would almost certainly have disappeared had a second volcano not erupted, depositing molten lava on top of the tephra. As the lava cooled and solidified, it formed a hard surface on the islands northern edge. Lava eventually flowed from the original volcano (Surtur I), too, increasing the size of the island and mingling with the tephra to strengthen the surface further and form a tough shield that could withstand the fiercest North Atlantic storms.

When viewed from sky above, Surtsey has been likened to the skull of a giant rodent, with craters for eye sockets and a snout pointing northwards to Iceland.

Since 1967, when eruptions ceased, Surtsey has become a laboratory where scientists have a unique opportunity to study exactly how life takes hold in a new environment. Surtsey’s birth has given scientists a unique opportunity to study the colonization of virgin land by plants and animals. Visitors are forbidden in case they carried seeds of spores in their clothing: only scientists wearing sterile garments were permitted to explore. The Surtsey Island is also on UNESCO’s World Heritage List. The first arrivals on the seashore were bacteria, seaweeds and other green algae, followed by mosses and lichens – an order that repeats the evolutionary process. Volcanic activity constantly threatens, however, and one day Surtsey may be destroyed as it was born.

Matheran – A Trek in the Clouds

On how to Travel..