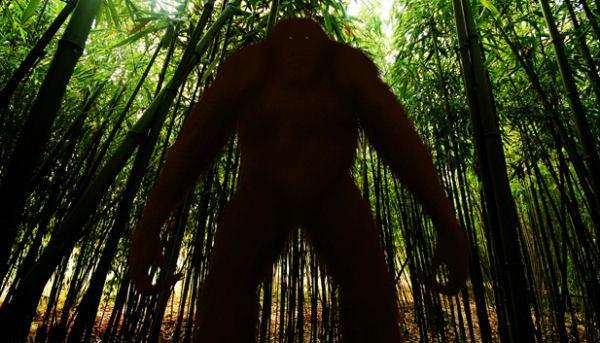 On June 19, 2014 a couple passing through the forests of Sundance Utah in their car managed to capture a video footage of what they think to be of the Bigfoot which is also known as Sasquatch. This is not the first time sightings have been reported of this mysterious creature. The Bigfoot has a long history behind it and has captured the imaginations of the locals to a great extent.

In the wilds of North America a mystical ape-like creature hides in the shadows. Standing over seven feet tall and having an immense, muscled body, it should be hard to stay concealed. Many that see him say he just disappears into the background. Like a man, he walks upright, but the short black hair covering his entire body indicates he is no homo-sapien. No bodies, bones or remains have ever been found despite more than two centuries of searching. The only evidence we have of this mythical beast is its huge tracks.

That is why the creature is named ‘Bigfoot’. Like many legendary Native American monsters, Bigfoot is a central part of indigenous traditional tales. They call him ‘Sasquatch’, the ‘hairy giant of the woods’. But it was his early personal introduction to European settlers that sparked off real interest. In 1811, David Thompson, a white trader, was in the north Rocky Mountains when he spotted a set of massive 14 by 8-inch footprints. Over many years, the tales of Sasquatch spread and on 4th July 1884, the Daily Colonist newspaper in British Columbia was proud to announce that a train crew had caught a strange beast.

In reality, the stocky, black-haired primate that they trapped was probably just a chimpanzee. The American and Canadian mountains gradually grew awash with stories of Sasquatch appearances; there were even reports of gangs of strange creatures attacking people in the forests. The Sasquatch phenomenon was never solely focused on the idea of a single creature, and people have always considered there might be a breeding colony. At that time, the mystical beasts were primarily of interest to lumberjacks, miners and those who lived or worked in areas where it had been sighted.

That changed in 1958 when Jerry Crew, a bulldozer operator working in Humboldt County, California, made casts of the bizarre footprints he had found. A local newspaper photographed Crew, and his picture was syndicated across the United States. The sight of a man holding a plaster cast record of the tracks of a mysterious beast started the modern Bigfoot legend. But if Crew’s discovery helped to launch the myth, it was an episode nine years later that sealed Bigfoot’s place in the American consciousness. In October 1967, Roger Patterson and Bob Gimlin were riding on horseback through Bluff Creek, north California. They were in the area specifically looking for Bigfoot. Suddenly one appeared in their path, and Patterson was thrown from his horse. Whilst Gimlin kept a rifle trained on the beast, Patterson quickly regained his footing and ran towards the creature, filming all the time with a cine camera they had taken with them. Below is the famous footage taken by Roger Patterson which has baffled researchers till date.

The result is perhaps the most enigmatic evidence yet. The footage shows a large hairy biped slowly strolling into the undergrowth. Experts who have closely studied the film suggest it is a female Bigfoot, as two mammary glands are just discernible on its front. Although the evidence is startling, many have questioned its authenticity. Some experts believe, if the film is played at a slightly faster speed, it could easily be a human in a costume. However, aspects of the footage are quite amazing. For example, biotechnology scientists have said that for a creature like Bigfoot to walk upright it would need an extended heel. The creature on the film has an extended heel.

Experts in the industry initially expected the film merely to be special effects, but they have been unable to find any tell-tale signs that it is a hoax. Similarly, a group of Russian scientists who attempted to determine the correct speed of the film came to the conclusion that the creature really did have a long, lumbering gait.

However, Gimlin himself has entertained the possibility that he might have been an unwitting participant in a hoax orchestrated by his friend. This we shall never know as Patterson died of cancer in 1972. More recent sightings of the ape-man have taken on a new and bizarre twist. People have reported seeing UFOs in the regions of Bigfoot appearances. Also, the creatures are now said to have bright red eyes and be carrying glowing orbs.

This may seem a strange development, but Sasquatches were always reported as having a quality beyond the physical, and it has always been suggested that when they die, Bigfoot bodies vanish into the ether. This is a shame, because to really accept Bigfoot’s presence, the world needs to see some hard, physical evidence. Till then it will be difficult to satisfy the scientists who dismiss its existence as being a mere folklore, misidentification and a hoax.

The Secret Society of Rosicrucians

The Twisted History of Alchemy

The Ouija Board – More Than Just a Game

Never be afraid to laugh at yourself, after all, you could be missing out on the joke of the century.

There are no accidents… there is only some purpose that we haven’t yet understood.

No one can make you feel inferior without your consent.

You don’t really conquer a mountain, you conquer yourself. You overcome sickness and everything else – your pains, aches, fears – to reach the summit.

Come forth into the light of things, Let Nature be your teacher.

You miss 100 percent of the shots you never take.

Life is just a short walk from the cradle to the grave, and it sure behooves us to be kind to one another along the way.

No work stains a man who is pure, who is in harmony, who is master of his life, whose soul is one with the soul of all.

If you don’t make mistakes, you’re not working on hard enough problems.

Books are the mirrors of the soul.

Today is only one day in all the days that will ever be. But what will happen in all the other days that ever come can depend on what you do today.

Confidence is contagious; so is lack of confidence.

Our greatest glory is not in never failing but in rising up every time we fail.

He who controls others may be powerful, but he who has mastered himself is mightier still.

You are confined only by the walls you build yourself.