This weekend we were at the Literary Festival held at Welingkar Institute, Matunga. Litomania – the Litfest was conceived by Think Why Not, the marketing firm that propelled the already masterful work of Indian literature – The Shiva Trilogy – to reach astronomical heights. The festival was set for two days – the 11th and 12th, forming the second weekend of October. It took off slowly but by the end of it all, it managed to stay true to its goal of bringing Indian writers and readers together and building an engaging interaction, starting from the late morning hours right up to the early hours of the night.

The Plot
The auditorium was brimming with people- various authors occupied the front rows, the middle rows up to the back were filled with bloggers, fans, budding writers, students and other people along with members of Ogle – the team managing the live stream of the event.

The Characters
The inauguration started around 10:30 am and was lead by various luminaries and concerning members including – Sangram Surve – the man behind the initiative, Prof Dr. Uay Salunkhe – the WE School Director responsible for facilitating the event, Dhananjay Sandu – Managing Director of Tridhaatu Realty & Infra Pvt. Ltd (the title sponsor), the primary supporter who made the event possible, complemented by the advisory board comprising of India’s favourite authors – Amish Tripathi, Ashwin Sanghi, Ravi Subramanian and Sivaraman Balakrishnan, Senior Manager of Landmark – the bookstore partner for the event, who turned the ground floor space of the institute into a grand library.

What is India reading? 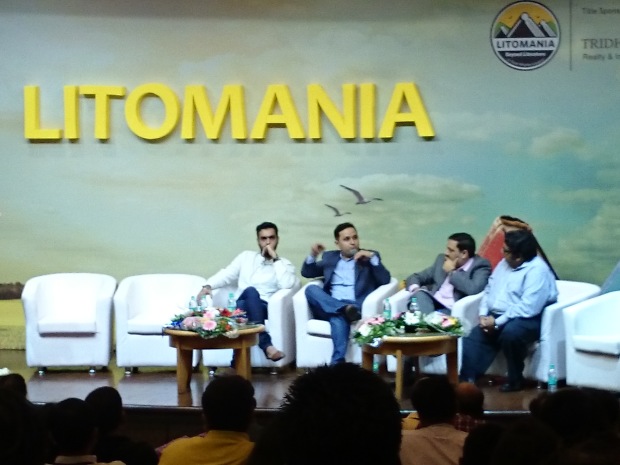 The search for desi Harry Potter
This session coincided with another, ‘Is India exploring the 50 shades?’ which was empaneled by authors like Madhuri Banerjee (Losing My Virginity and Other Dumb Ideas, Mistakes like Love and Sex), Amrita Chowdhury (Faking It), Bhaavna Arora (The Deliberate Sinner), and journalist Rachel Lopez of Hindustan Times’ Brunch Magazine. The former session was lead by children’s books authors Lubaina Bandukwala, Payal Kapadia, young adult writer Anusha Subramanian, and Preeti Vyas, the founder of FunOkPlease – children’s books publisher. 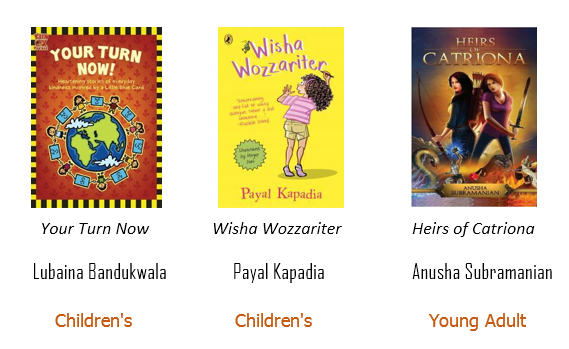 How to write a book and get it published
The late afternoon began with one of the highly anticipated sessions conducted by Ravi Subramanian – author of over 10 books and 5 bestsellers. This was a thoroughly engaging hour-long session with questions pouring from the audience and the author continually doling out simple straightforward and helpful advice right from his own inventory of experiences, and at times through cross-questioning and urging the audience to introspect and find out the answers they were looking for, within themselves.  Question’s like:

“Why do you write?”
“Do you write for money?”
“What is self-publishing?”
“Should you self-publish your first novel?”
“What do you love to write?”
…and many other relevant queries were raised and answered throughout the session which eventually stretched beyond the allocated time slot but without losing its energy and magnetism, as more and more conversations were sparked leading one to another.

Due to time constraints, this was the last session we attended after which, right before leaving, we collected some amazing goodies and handpicked our steal from a ginormous set of books piled on an extended table. These were our winnings from the previous day’s Litomania QnA contest held on Twitter and Facebook. #booksgiveaway

The Setting
The Book Stall on the ground level was erected by Landmark Bookstore. It showcased some of the best works by both, new and old, eminent Indian authors. On the right of this setup were few magazine stalls, one of which was Youth Incorporated – India’s leading youth monthly magazine, which gave away some interesting issues on Distant Education, Soft Skills and Career Success. Right next to these, nestled the small yet classy kiosk of the Terribly Tiny Tales, exhibiting their community curated written pieces, which were equally adorable and breathtaking.

Aside from the free goodies and giveaways, there was lots more to take away from these two days – invaluable thoughts, powerful ideas, priceless knowledge, rarefied wisdom and professional insights, from some of the best and experienced writers.

Also, the sessions conducted over the weekend were not limited to writing. They hosted a Culinary session for gastronomists, seminars on Corporate India and crafting careers for Management Professionals, workshops on Wildlife and following your dreams, a book launch, various books and genre discussions, entertainment acts on music and stand-up comedy and many more unmissable events were spread out throughout the back-to-back 12 hour runs of fresh-out-of-the-box LITOMANIA.

Ogle – the digital entertainment service provider – did an excellent job of providing a flawless live streaming video coverage for the entire event over the period of 24 hours. We managed to attend most of the sessions of day 1 and Ogle’d it over the rather busy Sunday.

Some useful insights we absorbed during our time there:

Write not for money, but because you have a story to tell and only you can tell it.

Do not worry about the readers, write what touches your heart and compels you emotions to flow.

Any act of imagination gives birth to learning and new experiences.

Write with you and your story as the center, not with the publisher or the end reader in mind.

Story telling is an art, Writing is an education..

A sneak peak of the loot we picked up:

To end it, we will definitely be looking forward to many more Litomania litfests, or rather hoping to see it turn into a yearly or biannual event, that will inspire and create new breed of readers and writers, thus taking the Indian literature scene to an unforeseen, unprecedented level of excellence.