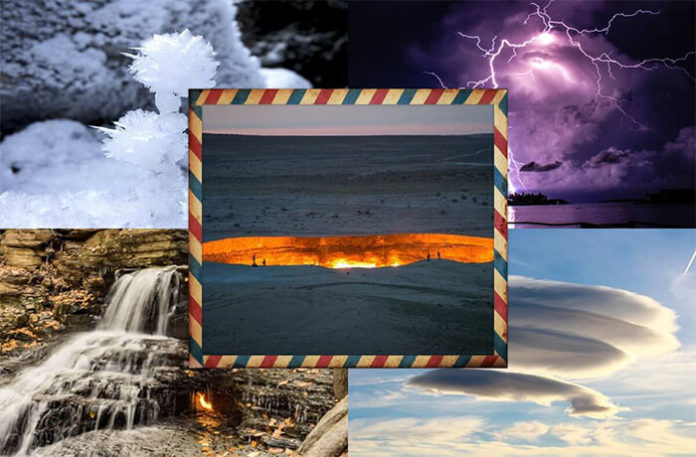 Hope you enjoyed the previous post on some of the rarest natural phenomena which occur across the world. We continue with some more of them and these are equally interesting.

Shielded by a small waterfall in New York, this eight inches tall fire blazes on famously known as the Eternal Flame. Surprisingly, the flame is visible almost throughout the year. The flame goes up to 20 centimetres high and is believed to have been lit up by the Native Americans who resided in the area thousands of years ago.

The secret behind this eternal flame is a source of natural gas, which keeps feeding the flame. After detailed research, it was found that the gas comes from a special type of rock called Rhine Street Shale, which is found 400 metres below the Earth’s surface.

This rock has the highest concentration of methane and propane of any known natural gas seep. The flame Is protected by the waterfall and thus it doesn’t extinguish. Even if it does, some of the hikers relight it if they see that it has been blown out.

The Door to Hell

This large natural gas field is situated in Turkmenistan. Located in Derweze, this natural gas field of fire collapsed into an underground cavern. To prevent the spread of methane gas, Geologists intentionally set it on fire and since then it has been believed to be continuously burning since 1971.

Originally believed to be an oil field, the scientists later came to the conclusion that the underground natural gas was indeed the main reason for this rare phenomenon. The engineers had even set up drilling and conducted operations to assess how much quantity of oil was available. But after the survey, it was concluded that it was a natural gas reserve and not an oil field. To nullify the threat of dangerous release of the poisonous gases from the site, the Geologists thought the best solution was to burn the gas off.

It was estimated that the gas would burn out within a few weeks but instead, it has been burning continuously for almost five decades now. The place has been visited by thousands of tourists every year. Since 2009, more than 1 lakh visitors have visited this door to hell.

Also known as the everlasting storm, the Catatumbo Lightning is considered as the world’s largest single generator of tropospheric ozone. This phenomenon is situated in Venezuela and one can witness this very frequently at the mouth of the Catatumbo river when it enters into the Lake Maracaibo.

This event by its occurrence is by no means rare as it happens about 140-160 nights a year, but this is probably the only place where one could see such a powerful atmospheric feat take place. The lightning is caused due to the formation of storm clouds at a height of more than 5 km. The frequency of the lightning is about 280 per hour and they keep flashing for 10 hours in a day. The lightning flashes are so powerful and distinct that they can be seen from as far as 400 miles.

There are many stories which suggest how these were discovered. Melchor Centeno in 1911 proposed that the closed wind circulation in the region was the main reason for this phenomenon to occur. Many other famous naturalists like Alexander von Humboldt and Italian geographer Agustin Codazzi have also researched the mechanism about the Catatumbo Lightning.

According to the Venezuelan scientist of Russian origin Andrew Zavrotsky, there were three epicentres of the Catatumbo Lightning namely Claras Aguas Negras,  Swamp National Park Juan Manuel de Aguas, and in a location west from Lake Maracaibo. He also added that the warm and cold air currents met around the areas causing the lightning. One of the studies from the University of Andes suggests that the lightning is caused by uranium present in the bedrock found in the area.

Between the years of 1997 and 2000, Nelson Falcon produced the first-ever microphysics model of the Catatumbo Lightning. According to him, the main reason for the lightning was the oil deposits in the region along with the methane produced by the swamps.

The formation of frost flowers is the result of the ground being no longer frozen but the surrounding air is still freezing cold. Due to the expansion of water when frozen, the sap of the plants also expands and during this process, long thin cracks are formed in the stem of the plant. Furthermore, the sap is drawn out of the cracks and when it in contact with the cold air, it freezes. This usually happens during the capillary action process. The result being the formation of a “petal-like” structure of thin ice pushed further as more water is drawn from the stem.

If one has to get a glimpse of this marvel, one has to locate them in the shaded areas of North America as that is where they are usually found early in the morning. Once touched by sunlight they melt very quickly. Since they are made of very thin ice, they are extremely delicate and can break quite easily when touched. Plants like Crownbeard, Yellow Ironweed and some fallen branches of conifers usually form these frost flowers.

These clouds definitely look like some science fiction fantasy or as some meteorologists believe they may have been an explanation for some of the UFO (Unidentified Flying Object) sightings. Formed in the troposphere i.e. the lowest layer of Earth’s atmosphere, the Lenticular clouds are stationary, lens-shaped aligned perpendicular to the direction of the wind.

The formation of these clouds takes place when the flow of air along the surface of the Earth is blocked due to maybe some kind of mechanical obstruction like buildings and bridges or any natural obstructions like hills, valleys or mountains. This results in the formation of eddies. The size of the cloud depends on the wind speed as well as the size of the object. A series of large-scale standing waves may be formed when the stable moist air flows over a mountain. When the temperature at the crest of the wave drops to a dew point and the moist air condenses, the lenticular clouds are formed. This is a rare occurrence as these clouds do not form in flat or low-lying terrain.

Hope you liked these post series. If you know of some other such rare occurrences, do write in your comments. We would be happy to write about them as well.

Also Read: Hessdalen Lights – The Most Mysterious of All Earth Lights

10 Rarest Natural Phenomena on Earth – I