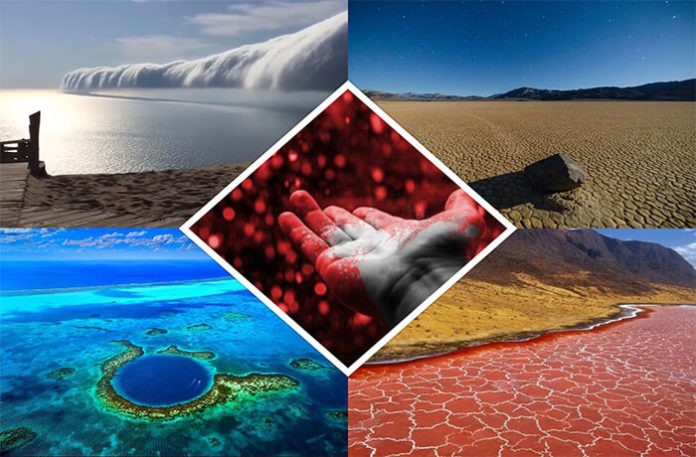 Nature around us has always surprised us with some unthinkable glimpses, which easily surpasses every human marvel ever made. These 10 rarest natural phenomena will surely sweep you off your feet.

Due to their rare occurrence, the highest chances of witnessing the Morning Glory clouds can be at only one place in the world. This rare phenomenon occurs in the Gulf of Carpentaria quite frequently.

The unique feature about these clouds is the formation of bands of roll clouds. The distance above the ground is merely 100 to 200 metres and they travel at speeds of 10 to 20 metres. The roll clouds which are formed may be just one cloud or a pack of 10 consecutive clouds.

During the movement of the clouds, a new cloud is constantly being formed at the front while the cloud at the end is being destroyed.

In the year 1942, the Royal Australian Air Force Pilots were the first to have witnessed the Morning Glory clouds.

This kind of event would seem like a nightmare which you would usually see in movies. But this actually happens in some parts of the world. Blood rain which is also termed as red rain is considered to be a rare phenomenon and has been frequently sighted in the state of Kerala, India. The red water which looks like blood falls from the sky in the form of rain.

Kerala witnessed this blood rain first in the year 1896 after which it has been reported several times. After the locals reported this in 2001, many scientists conducted several studies and it was found that the red colour was due to the flying particles of green microalgae called Trentepohlia, which grows in abundance the area. The government also commissioned a study for the same. The last reported blood rain was in the year 2012. A similar type of rain was also reported in Sri Lanka in the same year.

Initially, the blood rain was associated with superstitions as people thought this as an indication of bad luck. However, after the scientific reasoning has come to light, whenever this event happens people don’t miss the chance to record this special moment in their memories and go for a walk in the rain.

Also Read: 10 Most Interesting Facts about the Bermuda Triangle

At a distance of about 70 km from the Belize city in America, and near the coast of Belize, lies a giant marine sinkhole called the Great Blue Hole. This ancient spot is about 15,000 years old.

This rare site was declared as one of the top scuba diving areas in the world by the French diver Jacques Cousteau after which his team also did an investigation about its origin.

The hole was originated by the formation of karst limestones before the rise in the sea levels in at least four stages. However, later on, the scientists concluded that the hole was formed when the ocean began to rise and the sea levels were much lower. Whatever the reason may be, it is a sight to behold.

Tanzania hosts this beautiful looking red coloured lake which stretches to a maximum of 57 kilometres in length and 22 kilometres in width. Due to the volcano named Ol Doinyo Lengai, the water of Lake Natron can go up to a temperature of 140 degrees Fahrenheit (60°C). The volcano is known as the only volcano known to man which has erupted carbonatite lava. Scientists have also documented that the lake is quite rich in minerals and salt.

Lake Natron is also known as the Stone Animal Lake. Since the lake contains a high amount of salt and minerals, it makes it impossible for marine animals and birds to survive. Also, flamingos and many other birds are calcified by the water when they perish. Along with the lake’s red colour, this unique site has made a lot of tourists throng to witness these animals that look like they have been turned into stone.

So, what gives the red its red colour? Nasa in their findings says that extremely high Ph level along with the continuous volcanic activities are one of the main reasons why organisms like Halo archaea and other microorganisms thrive in the salty lake giving it the red color.

Hailed as walking rocks, the Sailing Stones are seen scattered in many places but mostly seen near the Death Valley National Park in California. If one sees these from a distance, one will come to the conclusion that the stones move from one direction to the next on their own.

One of the hypotheses suggested that due to the open areas, the strong wind was making these stones move. But it was hard to believe as some of the stones are quite large and heavy.  The sailing stones at the dry lake bed called Racetrack Playa in California were studied by scientists in the 1900s but were unable to decipher this mysterious occurrence until almost a century.

In 2014, finally, time-lapse footage solved this mystery. It was discovered that the stones were moving due to the ice sheets, even at wind speeds.