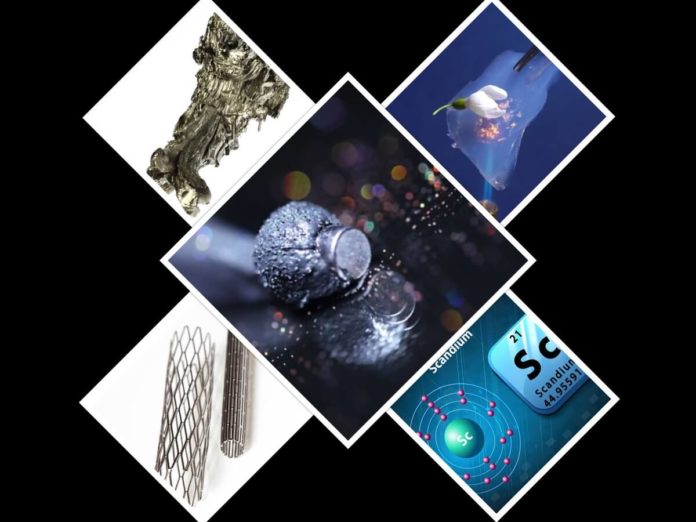 We continue with our list of the strangest and coolest substances in the world. Most of the inventions have happened in the realm of physics and chemistry. These futuristic substances have lots of potentials to change our world in a big way.

Speaking of bizarre materials, just recently scientists discovered a new type of self-healing material, or what is called self-healing polymers. Researchers used a catalyst based on a rare metal called scandium and created polymers composed of alternating sequences of ethylene and Nissl propylene and shorter ethylene segments. By their cold polymerization of ethylene and Nissl propylene. In short, these polymers are somewhat alive.

The elastomeric copolymers are very tough and can be stretched to the point where other elastomers would snap. But the remarkable thing is that they showed a self-healing ability when cut into two pieces and then put back together.

When the two cut pieces are put back together, the microscopic materials autonomously self-heal. Think this has something to do with just being sticky. Well, this self-viewing polymer can not only repair itself and dry conditions but also in water without any external energy or stimulus. Imagine the future is having many things made of this material that when broken can heal themselves.

When it comes to things being able to spring back into their original shape, the alloy Nitinol should be mentioned. Also known as nickel-titanium, named after combining the two elements shape memory is one of its unique properties. Nitinol can be deformed or bent at one temperature and then we’ll transform back into its original shape when it reaches a temperature slightly higher than when it was deformed.

Wonder how that works? The unusual properties of nickel-titanium are derived from a reversible solid-state phase transformation, which is known as martensitic transformation. At high temperatures Nitinol assumes and an interpenetrating simple cubic structure called the parent phase referred to as austenite at low temperatures nit and all spontaneously transforms into a more complicated mano clinical crystal structure called the daughter phase or martensite.

This next material was definitely an attention grabber. It’s called Aerogel and it’s sometimes called Blue air or frozen smoke. The interesting thing about this one is that it was also an invention and the result of a wager. It all started back in 1931, when a guy by the name of Samuel Stephens Kistler, but someone named Charles learned that he could replace the liquid in jelly with gas and without causing the jelly to shrink. Well, he won that bet and produced Aerogel by very slowly removing the liquid which left behind, just the solid structure.

But some surprising things were discovered after making the super-lightweight material. All that trapped air inside the gel makes it an incredible insulator, for instance, silicon Aerogel has a thermal conductivity of .03 watts per metre Kelvin in atmospheric pressure and .004 per metre Kelvin in a modest vacuum. That’s very similar to air itself.

If the material is held to a flame, you won’t see much happen. In fact, silica era gel water melts until 2000 degrees Fahrenheit (1093°C). Anything can be completely insulated from heat using this material, including flowers, crayons and you can’t even get a patch to ignite with a torch on the other side, applying heat.

While we’re on protective materials we should probably not forget to mention graphene, which is an allotrope of carbon, meaning it can exist in two or more forms in the form of a single layer of atoms in a two-dimensional hexagonal lattice, in which one atom forms, each vertex.

Aside from all the confusing things in proportion to its thickness, it is about 100 times stronger than the strongest steel. In fact, it’s one of the strongest materials in the known universe. Yet its density is dramatically lower than steel, and it conducts heat and electricity very efficiently. But unlike steel, it’s nearly transparent. Graphene has so many pros versus the cons, that it has a wide range of uses, such as being used in flexible electronics composites and coatings sensors, and much more. We hope you enjoyed the video, which one of these was your favourite? Tell us in the comments below.

This stuff is pretty cool to play with this magnetic monster is so amazing and full of fun. It can be created by simply adding ferric iron oxide powder to regular silly putty. and then the putty becomes ferromagnetic only strong magnets that are also thermal-magnetic will be engulfed by this tiny Magneto monster. If you place a Ferromagnet in the magnetic field, it will experience a force that pulls into a region of stronger magnetic strength.

I hope you liked it. Now tell me, guys. Which one of these materials do you find the most amazing, and why? Let me know in the comments below. And if you’re new here, and feel free to subscribe to our site to get notifications about the latest posts.