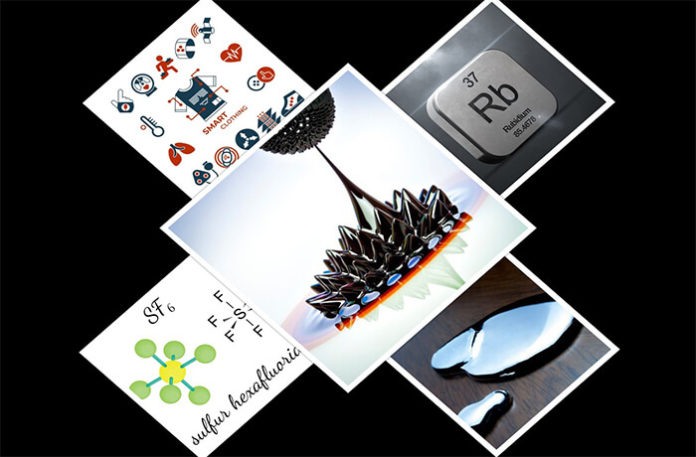 Today we bring you from the strange world of physics some substances and materials that don’t quite act like you think they should. Some of these elements are man-made, but some also occur naturally. From the strongest known material in the world to the famous ‘Terminator liquid metal’, check out these materials which have some really unique properties.

The name Ferrofluid is actually a combination of the words fluids, and feral magnets. These Ferromagnets are very strong and display permanent magnetism. Mix this with a fluid, and voila, you have a magnetic fluid that can be manipulated. Ferrofluid is usually a mixture of finely ground Ferromagnets that are coated with a surfactant to prevent the tiny magnetic particles from sticking together. They are then mixed with an organic solvent or water.

The cool thing is that these Ferrofluids take on a lustrous spiky shape that can be morphed into different sizes or patterns in the presence of magnets. When the solution is exposed to a magnetic field, the ferromagnetic powder experiences force along the magnetic field lines. But it’s not just the magnetic field at play here. In fact, the surface tension of the surfactant is the other force. And you might not know this but the outermost layer of all liquids has slightly higher energy than the remaining molecules of the liquid. So that lead Ferrofluid spiking you see is caused by magnetic force, gravity and surface tension. But there is more than just fluid that behaves strangely.

Sulphur hexafluoride or SF6, as it is usually called is a heavy inert nontoxic incombustible gas. It’s mainly used as an insulation medium in electrical transmittance systems, electrical distributing devices and displacing gas mixtures and metal smelting. It is colourless, innocuous and non-flammable and it’s very dense weighing five times as much as they are.

Other than being used in industry, this inert gas can do some crazy things like lower the tone of anyone’s voice when inhaled like helium. And since it’s so heavy, you can actually fill a container with the gas and float things on top of it as if it were water. It can also be poured like water over lit candles and extinguish them. All this sounds cool. It might be worth mentioning that SF6 gas is 23,500 times more warming than CO2, making it one of the most powerful greenhouse gases.

The next material is called rubidium, which is a very soft silvery-white metal and is the 25th most abundant element found on Earth, according to the periodic table. It is also one of the most highly reactive elements and has a density of about one and a half times that of water. It is solid at room temperature, but has a low melting point of 102.7 degrees Fahrenheit and will turn into molten metal if it reaches this temperature.

We mentioned that it is highly reactive and like other alkali metals such as lithium, potassium, sodium and cesium it reacts violently with water. This is because of its super high oxidising properties. It reacts with oxygen and can ignite simply from humidity in the air, which releases hydrogen and immediately bursts into flames.

A fun fact. Rubidium salts are used in glasses, ceramics, and it can be used to create purple coloured fireworks. One of the other interesting things about rubidium is that it can easily be ionised, and possibly be used as a propellant for ion engines for future spacecraft.

No that was not the Terminator metal we were talking about this is! This liquid metal really does seem to defy the law of physics. We’re talking about gallium, which is a soft silvery-blue metal when it’s at standard temperature. But put a piece of gallium in your hands, and it will turn into liquid metal, melting right in your palm. Gallium is mainly used as one of the main components in various types of electronic circuits such as in microwaves, high speed switching circuits and also infrared circuits.

Gallium nitride and indium gallium nitride are used in light-emitting diodes and diode lasers, which produce blue and violet colours. It has also been famously called terminator metal by some as it acts as though it’s alive when mixed with hydrogen peroxide. It can also melt through aluminium.

Of all the metals gallium has one of the largest ranges of when it’s in liquid form. The reason that it doesn’t react with air and water is because of its a layer of oxide. You might hear more about gallium in the near future, because of its antibiotic properties, which caused bacteria to die, and researchers are also studying the oral intake of gallium to treat cancer.

Next, we step into the bizarre world of E-textiles and wearable technologies. Smart textiles and fabrics developed with new technology that provides some added value to the wearer apparently these smart fabrics have the ability to communicate, transform, conduct energy, and even grow larger. Some fabrics gather energy from the environment by harnessing heat sound or vibration and then react to those elements.

A fashion designer by the name of Ying Gao created two dresses made of photoluminescent thread and eye-tracking technology and is activated by the viewers’ gaze. The two dresses in question appear to be alive and moving on their own.

We will continue to explore more such amazing materials in our next post.