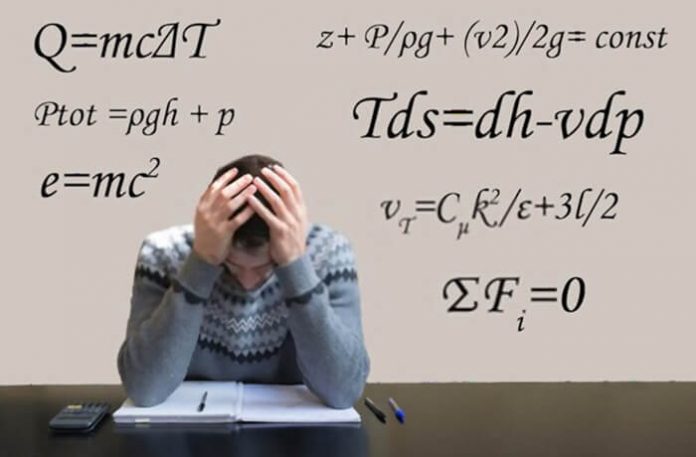 It’s plain to see that virtually every aspect of our modern world has been shaped by science and technology while we have yet to see the flying cars and hoverboards that we were all promised decades ago its safe to say that none of our parents and grandparents could have predicted a time when we would all carry tiny computers capable of accessing the entirety of the world’s knowledge in our pockets and use them mainly for chatting with friends and looking at pictures of cats the internet self-driving cars smart appliances these kinds of scientific advances are designed to make life easier and more streamlined than ever before but that’s not necessarily the aim of ever-new technology in fact some of the mind-blowing things you’ll ever see seem to have been cooked up for that express purpose to blow your mind and to make you wonder just how hard and fast the rules of physics really are.

Here are the top 10 objects apparently invented for one reason only to take the natural laws governing our world and toss them right out the window.

Unlike most objects in our list, the rattleback has been around since ancient times and it puzzled and fascinated our ancestors every bit as much as it does us. An elliptical shaped top the rattleback is designed for spinning but only in one direction. If you attempt to spin one in the wrong direction it will become unstable rattling to a stop and then promptly begin to spin in its preferred direction. This action seems to violate a number of physical laws most notably the law of conservation of angular momentum. 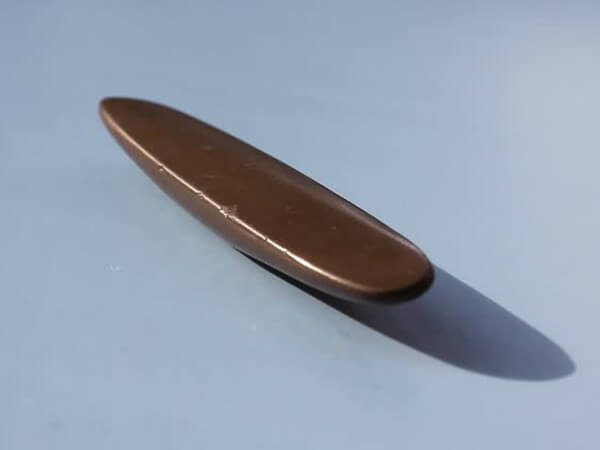 Ancient rattlebacks were made out of many strips of wood of varying densities while modern ones can be made from glass, plastic or a range of other materials. Put as simply as possible the reversal action comes from instabilities which arise on the objects axes which affect dynamic properties known as pitch and roll. To describe the rattleback’s action and detail would require a degree in physics and enough time to write an advance dissertation but if an object which can only spin in one direction is enough to rattle your brain consider that there exist some special rattlebacks that will reverse when spun in either direction.

The Gomboc looks like nothing more than an oddly shaped plastic rock but its strange shape and composition constitutes an astonishing display of mathematical prowess. It is a type of object once thought to be impossible to construct a monostatic object which means that it can’t rest in any position other than its preferred one. That is to say, it is the world’s first self-writing objects first proven theoretically possible by an extremely complicated mathematical equation and which took ten years in countless experiments to perfect. 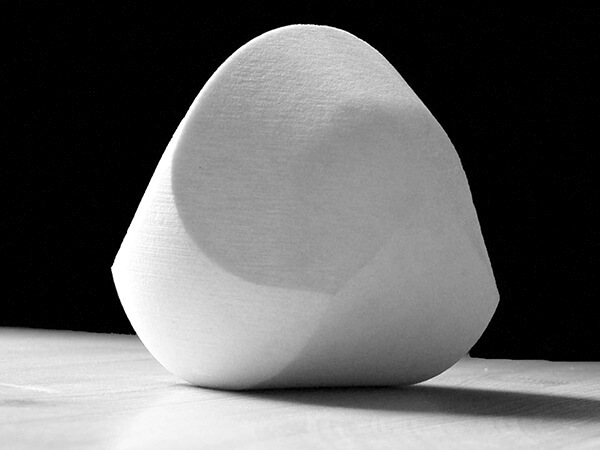 To dumb it down significantly the Gomboc’s secret lies in having one stable and one unstable point of balance. Laid down on its side the Gomboc will start to shake. Wiggle and rock back and forth until it achieves its desired equilibrium. Although not terribly practical the amazing design one the two universities of Budapest scientists who led the project a slew of awards and accolades and if you’d like to own the world’s most interesting paperweight, you can even buy one for the low price of around $1700.

If you were to witness water in a fountain flowing uphill your first reaction would probably be to attempt to shake yourself awake from whatever weird dream you must be having. But James Dyson, the man who invented the Bagless Vacuum Cleaner took inspiration from the famous surreal Dutch artist MC Escher in designing the fountain piece at the center of what he appropriately calls the wrong garden, a series of four plastic ramps which the flowing water travels up before cascading off the edges and making its way up the next ramp. 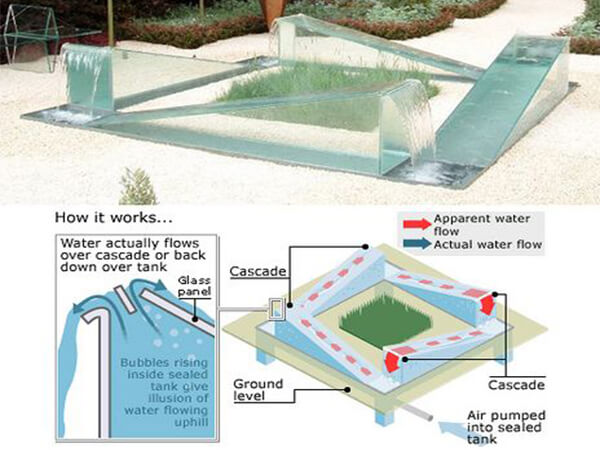 It’s a mind-bending site, but it’s more of an illusion than a demonstration of physics mastery. The ramps are actually are covered by an ultra-thin layer of glass and pressurized water is pumped into the system. The setup is carefully designed so that once expelled at the end of the ramp a small amount of water is diverted back down the glass covering coating it in a thin layer of water. It’s just enough to produce the illusion that there is no covering and that Dyson’s fountain is operating in a way that shouldn’t be physically possible. There are few other tricks involved but Dyson isn’t revealing those until he has a patent.

Chopping wood is a physically strenuous rather dangerous activity. Hold your axe wrong or accidentally strike the log with a glancing blow and you’re apt to have the axe head come springing away in an unanticipated direction which could pose a serious threat to life and limb. But one Finnish inventor got to wondering if there wasn’t a better way to build an axe, one which would minimize the danger and make the work easier and lo and behold it turned out that there was. 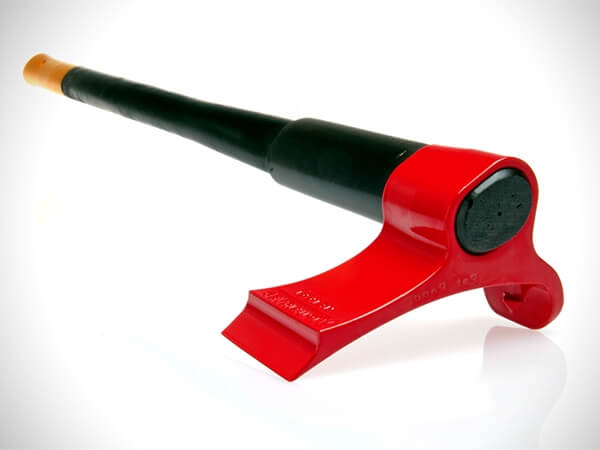 It’s called the Lever Axe and its action exploits the very mechanism the name implies. It looks just like a regular axe but there’s a small projection off to one side that serves to both disperse kinetic energy and convert it to rotational energy. Not only does this dampen the spring-back effect, it actually helps to pry the wood apart like a lever with each and every strike making the chore exponentially easier. It also causes the axe to naturally come to rest on its side, with its blade pointing away from the handler, a safer more effective and labor-saving design that really should become standard for all axes in the future.

Bulletproof glass or ballistic glass has been in use in the security industry for decades. It is generally produced with materials that help to flatten out bullets and absorb shock and it is very effective. But there are some purposes for which it hasn’t been terribly practical. For example, a soldier in the battlefield may not want to make use of ballistic glass, while they may be protected from enemy fire, the very material that protects them keeps them from returning fire. Enter protected armored services, a company at the forefront of producing bulletproof laminates. They have developed the world’s first unidirectional bulletproof glass meaning that one side will stop bullets but the other will allow them to pass through. 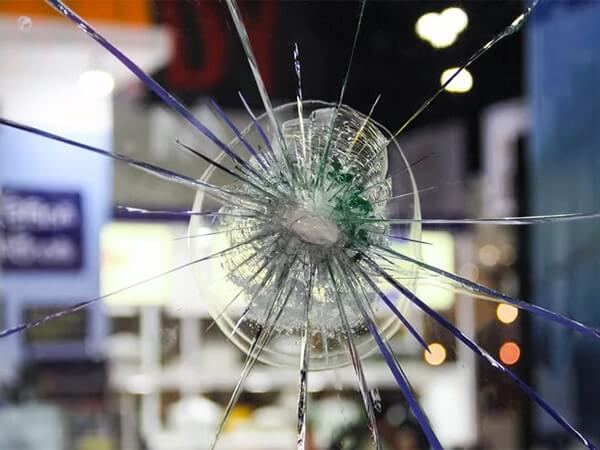 This seemingly impossible feat is achieved by layering special types of acrylics in such a way that one side will absorb shocks while the other composed of softer polycarbonate allows munitions to pass and burst through the other side. It’s an ingenious design that could save countless lives as long as those using it make sure they’re on the right side.

Make sure to read part two of the Things that have Defied the Laws of Physics.