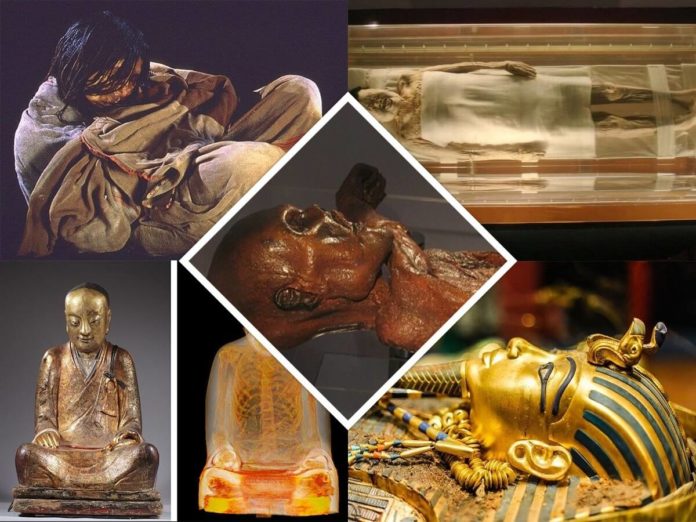 We continue from where we left. Each of these mummies has their own unique history which has made them the contenders to be in this list. Some of the mummies are thousands of years old and the art of preservation needs to be respected.

Our list would surely be incomplete without The Tomb of Tutankhamun. When British archaeologist Howard Carter discovered King Tut’s tomb in 1922, it catapulted him to worldwide fame. The tomb was packed with a mind-blowing wealth of artefacts, including of course the 3300-year-old mummy itself, wrapped in linen and placed inside of golden sarcophagus. The phrase etched on the Sarcophagus “Death, eternal punishment for anyone who opens this casket” was talk of the town when it was discovered.

The premature deaths of some who entered the tomb popularised a belief in a curse of the pharaohs inspiring the original The Mummy Movie, and for better or worse, all mummy movies to come. Tutankhamun remains arguably the most famous pharaoh in history and the most famous mummy. The documentary Samsara, in its opening scene, shows the Mask of Tutankhamun with a beautiful piece of music in the background. Watch it below.

The German tourists who stumbled over Ötzi’s remains thought they found the body of some poor mountaineer, but the Iceman actually died over 5000 years ago. Frozen in the ice for millennia, he eventually began to thaw out. He was around 45 when he was killed, probably from a blow to the head and or the arrow lodged in the shoulder. But he went down fighting.

Based on DNA analysis, forensic scientists suggest he shot two people with one arrow and may have carried a wounded companion over his shoulder before finally dying, knife still clutched in his right hand.

In 1990, a very old Buddhist statue underwent restoration and experts were shocked to discover human remains within. In 2015, a CT scan of the artefact revealed the 1000-year-old mummified remains of a Buddhist monk seated in a lotus position. With ancient Chinese characters printed on paper, his organs were replaced with these scraps.

The text inside these papers identified him as Liuquan. His mummified remains could be an instance of Sokushinbutsu, the Buddhist practice of living mummification, which involves gradual starvation that eliminates liquids and fats from the body.

Over 500 years ago, three Incan children were left to die, near the summit of the volcano Llullaillaco. On the border of Argentina and Chile, perfectly preserved by the cold, the frozen bodies were rediscovered in 1999. The three children were found to have been drugged by maize beer and coca leaves.

Researchers believe the oldest, a girl in her early teens was a sun virgin chosen to serve as a ritual sacrifice. With her was her younger half-sister whose body had been struck by lightning after death, and an unrelated bound boy with blood and vomit on his clothes, signs he may have put up a struggle.

Workers in the late 60s and early 70s accidentally discovered the tomb of the Marquis of Dai, Xin Zhu, who was a noble during the Han dynasty in China over 2000 years ago. She is to be believed that she led a life of considerable ease and luxury.

With themes of death and rebirth, the mummy was buried in four nested coffins. With eyelashes still on her eyelids and traces of blood still in her veins, this body is one of the most best-preserved ancient humans ever to be found.

The main reasons for the body being so well preserved was due to the presence of an unknown liquid and due to the airtight tomb. Both her body and belongings are now kept at the Hunan Museum in China.

Hope you liked our picks? Do let us know in the comments below if you would like to know about many other mummies which did not make this list. I am also sure there will be many more discovered in the future.