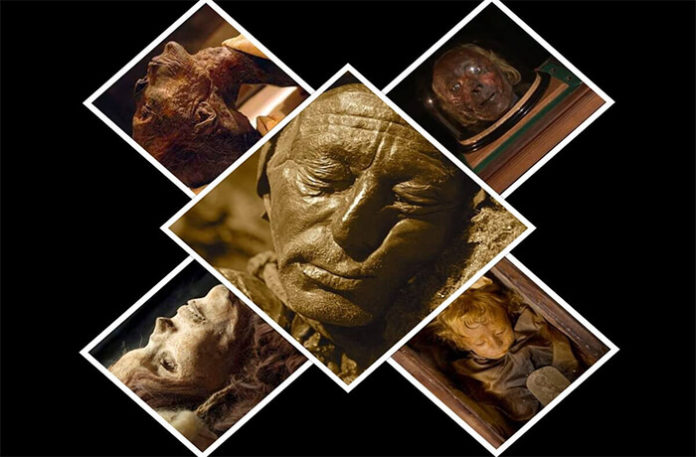 No joke. I have watched a lot of documentaries and movies about ancient Egypt as a kid, and they would often show mummies and I ended up having a nightmare that one was in bed with me and quite frankly I’m still going to freak out. I mean, looking at the sarcophagus is one thing, but with the actual mummy! The first time The Mummy movie came out in the theatres, I was pretty much excited and the movie surely did not disappoint.

Anyway, do you think you know which real-life mummy is the most famous? It is time to open the pandora’s box, meaning the sarcophagus and get a chance to look at these marvellous mummies. The list which we reveal today is some of the most renowned human bodies to be preserved after death by means of either through natural or artificial means.

When the couple Viggo and Emil Hojgaard stumbled over a corpse as they cut peat in 1950, they thought they had unearthed a recent murder victim, but in fact, Tollund Man, as he became known had died roughly 2200 years earlier. Right down to crease lines around his eyes, the body of the Tollund Man is remarkably preserved. Although, the skin is blackened.

According to some scholars, the Tollund man died after being hung as a part of human sacrifice. This version, however, is still a debatable theory. Due to low temperatures, lack of oxygen and acid which wards off bacteria, many human remains have been discovered across Northern Europe. One can also catch a glimpse of the Tollund Man in the spectacular documentary Samsara. Watch the trailer below.

She almost seems to be sleeping. The Xiaohe Princess, also known as the Beauty of Loulan is just one of over 160 mummies discovered in China’s arid Tarim Basin. Some buried in upside-down boats with a forest of gigantic poles rising from the prows. Although the Beauty of Loulan is around 4000 years old, the dry desert heat has preserved even her auburn hair.

Since many other mummies which have also been discovered along the Silk Road have distinctly Caucasian features, the result has been a lot of conflicts relating to their early movements and origin.

She has been famously believed to have been called the queen who would be declared the king one day. This female Pharaoh used to order statures of hers which would have bulging muscles as well as a false beard. After marrying her half-brother Thutmose II, who was then the regent. She got the full powers of the Pharaoh after his death. Despite her successful reign, many of her statues were later destroyed, possibly by her son or grandson.

The 3500-year-old mummy was found by real-life Indiana Jones Howard Carter in the year 1903 but was actually identified as Hatsheput in the year 2007. This identification was done when a molar tooth fit seamlessly into her mouth like a glass slipper onto a slender foot.

Also Read: Pyramids of Giza – Legacy of the Pharaohs

In 1918, a brokenhearted father approached embalmer Alfredo Salafia in Palermo Sicily. The man’s almost-two-year-old daughter had just died of pneumonia. Salafia readily agreed and placed the girl in a glass casket after embalming her and placed the casket in the Capuchin catacombs of Palermo.

While sceptics have claimed the mummy is really made of wax X-ray and MRI scans show otherwise. Her mummified small body still rests in the catacombs. It feels so real that sometimes it seems to peer out at visitors. This astonishing preserved human girl was also shown in the documentary Samsara.

This list would be incomplete without one of the weirdest mummies. Jeremy Bentham left very specific instructions which were to be followed after his death in 1832. The English philosopher and founder of modern utilitarianism wanted to be publicly dissected by his friends. Next, he wanted his skeleton to be dressed up in his clothes and stuffed full of hay because being buried is boring. One of the weird requests that were made by Jeremy Bentham was that he wanted his head to be mummified using the traditional Maori techniques so that his body would be turned into an auto-icon.

Unfortunately, this did not go as planned. So, a wax head was used instead. That didn’t stop students from stealing the real head in 1975 and ransoming it back for 100 pounds. Though only 10 pounds was paid by University College London where it was being displayed.